There are literally hundreds of terms used in the lighting world. Most of them are technobabble that only engineers need to understand, but the terms below are important to be familiar with if you’re thinking about upgrading your lights to LEDs.

An electronic component that is required to start fluorescent bulbs. Ballasts typically need to be replaced every 2-4 years.

Color temperature is a measurement in degrees Kelvin (K) that ranges from deep yellow to light blue. The chart below shows different color temperatures very well:

CRI is a scale from 1-100 that measures a light source’s ability to show true color. Natural sunlight, at noon, has a CRI of 100. A light bulb with a CRI of 100 would show colors exactly as they would appear in sunlight at noon.

A foot candle is a unit of useable light on a surface. A foot candle measurement of “1” is the amount of light on a 1 square foot piece of white paper that is one foot away from a single candle.


In the real world, it’s important to remember that as a bulb gets further away from a tabletop, the foot candles decrease. So, if you have higher ceilings, you would logically need brighter lights to get the same amount of useable light (foot candles) on your table.

The amount of light a bulb puts compared to the amount of power it consumes, measured in lumens per watt. Basically, how efficient a light bulb is.

A lumen is a unit of light put out by a bulb. The higher the lumen value, the brighter the light. As a point of reference a 100 watt, standard incandescent light bulb puts out about 1700 lumens.

Tiny little PAR bulbs that are found in pendants. 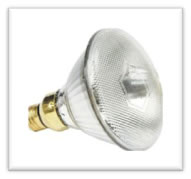 The most common types of fluorescent tubes. The number refers to the diameter of the tube in 8ths of an inch, so a T8 is 1 inch in diameter. Wattages vary, but typically a T-12 uses 40 watts, a T8 uses 32 watts, and a T5 uses 28 watts.

A unit that houses fluorescent tubes or LED lights that is typically found in a drop ceiling.